How Perseverance is dealing with its pebble problem 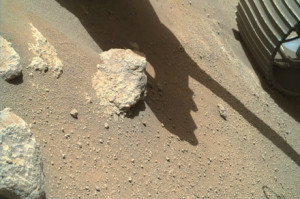 The Perseverance rover, currently exploring Mars's Jezero Crater, has run into a challenge when collecting samples from the planet. It recently attempted to collect a sample from a rock called Issole, but sensors detected an anomaly during the collecting process and the rover had to pause its activities. "This is only the 6th time in human history a sample has been cored from a rock on a planet other than Earth, so when we see something anomalous going on, we take it slow," wrote Louise Jandura, Chief Engineer for Sampling & Caching at NASA/JPL, in an update.

The camera is located on the turret at the end of the rover's robotic arm. The image was acquired on January 13, 2022 (Sol 320). NASA/JPL-Caltech

The team found that the issue occurred in a part of the sample collection process called the Coring Bit Dropoff. This is after the rover has drilled into the rock and removed a sample.

The drill bit and sample tube then need to be guided from the drill at the end of the rover's robotic arm and into its carousel, inside the rover chassis. During this movement when it came time to put the sample in the carousel, the rover's sensors detected more resistance than expected and paused for investigation. When the team examined images of the carousel, they saw that there were some pebbles inside it which likely fell out of the sample tube.

It is these pebbles that are preventing the sample tube from slotting neatly into the carousel, so they began their next task of clearing this debris. This involved using the robotic arm to pour the sample back onto the ground. "I imagine your next question is, 'Why are you dumping out the contents of the sample tube?'," wrote Jennifer Trosper, Project Manager at NASA's Jet Propulsion Laboratory in a further update. "The answer is that, at present, we are not certain how much cored rock continues to reside in Tube 261.

And while this rock will never make my holiday card list, the science team really seems to like it. So if our plans go well with our pebble mitigation (see below), we may very well attempt to core 'Issole' (the rock from which this sample was taken) again." Next, the team will perform tests by rotating the carousel twice and seeing if this moves or dislodges the pebbles. "We expect the data and imagery from these two rotation tests to be sent to Earth by next Tuesday, January 18," Trosper wrote. "From there, we'll analyze and further refine our plans.

If I had to ballpark it, I would estimate we'll be at our current location another week or so -- or even more if we decide to re-sample Issole."