NASA Mars rover set to dump out a rock sample, something the team ‘never imagined’ 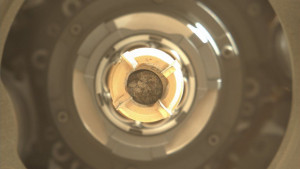 NASA/JPL-Caltech This story is part of Welcome to Mars, our series exploring the red planet.

Troubleshooting is a key skill for any team that works with robots on Mars, because the planet will mess with your robots. NASA's Perseverance rover team is working out how to fix a problem with some pebbles getting in the way of its rock sampling system. But first, the rover is making a surprise move by dumping the sample it's collected onto the ground.

Perseverance drilled and extracted the sample from a rock nicknamed Issole in late December, but wasn't able to complete the handoff of the sample tube from the robotic arm into the bit carousel, a component that passes the tube into the rover for processing. The culprit is a group of small pebbles, which need to be cleared out.

It's not as simple as just asking the rover to shake off like a wet dog. NASA is now embarking on a multi-step plan to fix it. CNET Science

From the lab to your inbox.

Get the latest science stories from CNET every week. First, the rover took a good look at the ground below it so it would be able to monitor for changes when it dislodges the offending pebbles. Next up is a maneuver for the robotic arm. "Simply put, we are returning the remaining contents of Sample Tube 261 (our latest cored-rock sample) back to its planet of origin," wrote project manager Jennifer Trosper in a rover update on Friday.

Trosper described it as something "I never imagined we would perform -- ever." The team expects dumping out the contents will be pretty straightforward, involving pointing the open end at the ground and letting gravity take over.

The rover is equipped with a set of sample tubes that allow it to stash away bits of Mars NASA hopes to bring back to Earth with a future mission. The samples are precious cargo, which is why the idea of dumping one seems so strange.

But NASA isn't sure how much rock is still in the sample tube. If the team is able to clear the pebble obstruction, the rover might try to sample Issole a second time to get a more complete chunk of the rock.

The Perseverance rover took a good look at the ground so the team will be able to spot any pebbles it drops.

The next steps will focus on the pesky pebbles. NASA is commanding the rover to perform some rotation tests of its bit carousel. "Our expectations are that these rotations -- and any subsequent pebble movement - will help guide our team, providing them the necessary information on how to proceed," Trosper said.

NASA should know by early next week what effect the carousel movements had on the pebbles.

Every NASA rover has run into challenges on Mars, from wheel wear to rocks that don't behave.

Clever and careful solutions have helped keep missions going, so it's likely the pebbles won't hinder Perseverance's work for too long.