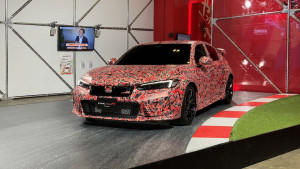 Still just a prototype for now.

Last month Honda released a bunch of photos of the next-generation Civic Type R testing at the famed Suzuka Circuit in Japan, our best look yet at the upcoming hot hatch. On Thursday as part of its Tokyo Auto Salon showcase Honda released a video of the Type R on the track at Suzuka, giving us a few more bits of info.

The car is the exact same one shown in the previously released images, so there isn't much new in terms of styling that we can see. But I will say that the new Type R looks really good in motion -- the wider fenders are super noticable, the wing is awesome and the car as a whole looks sleeker and less fussy than the outgoing model.

We do get a few glimpses of the interior. Like the 10th-generation Type R, the upcoming 11th-gen model will have bright red cloth seats with aggressive bolstering and a suede steering wheel. The trim on the door panels is covered in camo, so the Type R will likely have carbon fiber and aluminum bits for a sportier vibe.

The central infotainment screen is also blurred out, leading me to believe the system will have some sort of telemetry function. The new Type R is retaining the three-exhaust-tip setup of the old car, but the tips themselves look larger and a lot cooler. And despite the techno track playing throughout the teaser video, we're able to hear a bit of the Type R's exhaust note and it sounds louder and better than the previous car's.

Sound was always one of the biggest issues with the last Type R, as it didn't come close to matching the rowdy Hyundai Veloster N or even the Volkswagen GTI in terms of aural enjoyment, so hopefully the new Type R will remedy that.

Honda says the Civic Type R will be fully unveiled later this year, and it should be on sale in the US before 2022 is over.

It'll be a busy year for the company, with Honda announcing on Wednesday that 2022 will see the debuts of completely new generations of the Accord, CR-V, HR-V and Pilot.

Climb in the driver's seat for the latest car news and reviews, delivered to your inbox twice weekly.