Our universe isn’t supposed to exist 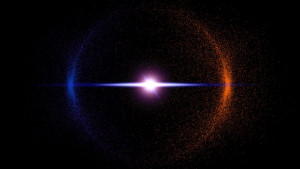 You're probably familiar with the following story: 13.8 billion years ago, the Big Bang led to stars and galaxies, which led to planets and life, and eventually, to you and me. But there's a glaring gap in this chronicle, an aperture so big, solving it would shake our knowledge of reality.

"If we pluck, in principle, the best physics theories ... we would need to conclude that the universe, as we observe it, cannot exist," said Stefan Ulmer, a physicist at the RIKEN-led Baryon Antibaryon Symmetry Experiment at the European Council for Nuclear Research.

Get the CNET Science newsletter

Unlock the biggest mysteries of our planet and beyond with the CNET Science newsletter. Delivered Mondays.

But... here we are playing Wordle and paying taxes, so either our laws of physics are wrong or we're missing massive pieces of the metaphysical puzzle.  Among the army of scientists looking for those pieces, Ulmer has spent years studying the seed of our universe's existential crisis: antimatter. In a paper published Wednesday in the journal Nature, he reports an update: Antimatter doesn't react to gravity any differently than normal matter does.

Don't worry if that last bit completely flew over your head, it'll all come together.

First, what is antimatter?

Everything from the sun to the device you're reading this article on is made up of the normal matter we know and love, composed of atoms built with positive protons and negative electrons. The Big Bang gave rise to all this matter, and the rest is literally history. Here's the weird part: Our universe also holds a tiny amount of antimatter, composed of atoms built with negative protons and positive electrons.

Both matter and antimatter are made of atoms similar to this one. Protons (and neutron) are in the center, and electrons are swimming around on the outer shells. Antimatter just has opposite charges.

These two also have a rift.

When they come into contact, they totally annihilate one another because of their opposite charges. Even when scientists create antimatter for experiments, the zippy particles must remain in a vacuum because an antimatter particle in a normal matter environment would immediately go "poof."  This incompatibility dominoes down to a huge existential problem - and it's not just that we can't meet our antimatter counterpart someday without basically exploding.

There should've been a particle war

Each is super solid in its own right, and combining them leads to a perplexing outcome.  Matter and its arch nemesis are two sides of the same coin. "The architecture of space and time basically implies that matter and antimatter are, in principle, exactly symmetric," Ulmer said, "which means they have the same masses, they have opposite charges, opposite magnetic moments and so on and so forth."

If that's true, the Big Bang should've had a 50/50 chance of forming either one. And had a 50/50 distribution happened, antimatter and matter should've completely destroyed one another. (Remember the rift?) With such a particle war, the universe wouldn't have any matter. Space wouldn't hold a sun or an Earth, and would surely lack humanity.

Only a leftover sort of energy would've lingered after the battle. But the sun, Earth and humans exist.

For some reason, the universe exhibits several orders of magnitude more matter than antimatter, a cosmic riddle known as baryon asymmetry, the namesake of Ulmer's laboratory. Did Big Bang-generated antimatter vanish?

Was there never any to begin with?  "We do not understand the origin of matter and antimatter asymmetry," Ulmer simply puts it.

The part where it comes together

Because the Standard Model's prediction of a 50/50 matter-type distribution relies on the particles being exactly symmetrical, the mystery may finally be solved if we find a way to breach the presumed parallel. "If, let's say, the proton would be a bit heavier than the antiproton, that would immediately explain why there is more matter than antimatter," Ulmer said.

That'd pretty much elucidate why the universe exists. Let's return to Ulmer's study results: Both matter and antimatter respond to gravity the same way, ruling out some options on the ledger of possible symmetry violations. Ta-da, told you it'd come together.

Ulmer's experiment began with a fascinating device called a Penning trap, a small metal contraption that detects a particle's cyclotron frequency, or frequency at which something moves in a magnetic field.

An image of Ulmer's Penning trap.

The researchers placed a lab-produced antiproton inside and measured its cyclotron frequency, then popped in a negatively charged hydrogen ion and measured the same parameter. (Ulmer used a negatively charged hydrogen ion, or atom with one proton and two electrons, as a normal matter representative because it matched the antiproton's negative charge).

It's easiest to think of the experiment in terms of music. The Penning trap's pickup system, Ulmer says, is akin to what's in an electric guitar. "It's, in that sense, a very musical experiment," he explained, being a guitar player himself.  "The frequency range is a bit different, but we are listening to the sound of what does not exist in the universe," he added. "With our current ability to listen, [matter and antimatter] sound identical."

The particles play the same melody, if you will, which also means they have the same music notes. Aka, these particles' cyclotron frequencies were the same, as were many of their resulting properties, such as charge-to-mass ratio. All of these similarities are now eliminated from the list of possible matter-antimatter symmetry violations.

Space as a laboratory

But the researchers' ultimate goal was to use their cyclotron frequency data and see whether the antimatter song changes alongside adjustments in a gravitational field. Specifically, they tested whether Einstein's weak equivalence principle - true for normal matter - works on antimatter.

Einstein's principle states that any object in a gravitational field behaves independently of its intrinsic properties. For instance, a piano and a feather would fall to Earth with the same acceleration in the absence of external forces such as wind.  Intuitively, we might assume antimatter's opposite charges would force it to "fall up," or at least have some variation in behavior.

For this facet of the experiment, Ulmer took advantage of some cosmic lab equipment: the Earth and sun. "As the Earth is orbiting around the sun in an elliptical orbit," Ulmer said, "the gravitational potential in our laboratory changes as a function of time."  So, he and his research team measured the cyclotron frequencies, aka the melodies, of both the antiproton and negative hydrogen ions at different points in time. After 24,000 comparisons, they concluded both particle types reacted the same - with very, very high certainty.

Voila, Einstein's principle works on antimatter. It does not, in fact, fall upward.

A graph detailing the timepoints at which Ulmer's team measured their particles.

"We'll continue making the microscope better and better to be sure," Ulmer said, and "if we find something unexpected in these experiments, this would change our fundamental understanding of the laws of nature."

For argument's sake, let's suppose someone finally finds a discrepancy between antimatter and matter. What might that mean for us?

Violating matter-antimatter symmetry would mean violating a larger phenomena called CPT invariance. C stands for charge, P for parity and T for time. In a nutshell, the rule states if any of these things were reversed, the universe would fundamentally remain the same. If time went backward instead of forward, if everything was left handed instead of right handed and, you guessed it, if all matter had the opposite charge, the world wouldn't change.

If we were to find antimatter isn't the same as normal matter, C would be violated. And if CPT invariance is violated, then causality, scientists say, may no longer hold. "I think this would maybe lead to a more philosophical change in our thinking," Ulmer said. "Comparable to what happened in the 1920s when quantum mechanics was developed." Adding, "up to that point, people were thinking that everything is deterministic.

In quantum theory, things cannot be deterministic by definition anymore - so this changes how people are understanding themselves."

Even more baffling is the realization that because the universe appears to exist, we sort of already know antimatter is up to something.

In a sense, we already know we'll have to adjust our perspective of reality.