Is now the time to ditch your Apple Watch for the Oura Ring?

I regularly wear the Oura Ring and the Apple Watch Series 7 together, as one fills in the gaps the other has in its arsenal of features. Through two recent updates, the Oura smart ring has increased its ability to monitor health and fitness with the addition of simple fitness tracking and SpO2 blood oxygen monitoring. Is the Oura Ring now a fully-fledged health and fitness tracker ready to be worn on its own, without any compromises?

Both the workout tracking and the SpO2 blood oxygen monitoring have been promised since the launch of the third-generation ring in 2021, so their arrival is overdue.

The workout mode employs the ring’s heart rate tracking and came to the ring at the end of May, while the Sp02 feature came at the end of July. Once you set the feature up, it works automatically.

The workout mode is quite simple as it only looks at your heart rate to assess intensity, and doesn’t seem to use the accelerometer to cover movement, making it relatively basic when compared to other wearables. The SpO2 monitoring works when you’re asleep.

With it, the Oura Ring also tracks Breathing Regularity — helping to identify changes in your breathing patterns overnight, which may be indications of sleep-related problems like sleep apnea. Neither are reasons on their own to buy an Oura Ring, but when viewed as enhancements to the overall ability, they do make the smart ring more tempting to people interested in moving away from a wrist-worn health and fitness tracker. I’ve always worn the Oura Ring along with a smartwatch, as it gives the most comprehensive picture of my sleep and activity.

But with these new features, the Oura Ring gets a few steps closer to being a capable, standalone wearable.

Getting the Oura Ring to track exercise on demand is crucial if it’s to be worn without any other activity tracking device, and the Workout HR mode is a step in the right direction. However, it’s not quite ready to take on the Apple Watch or any other dedicated fitness band just yet, because the options are too limiting. 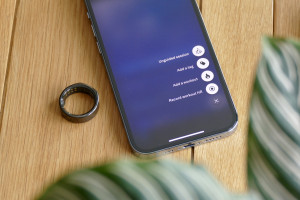 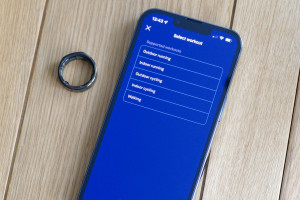 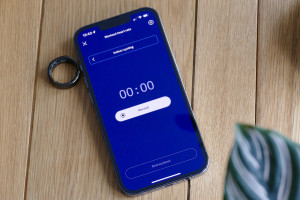 It’s activated manually most of the time, but it does work with the ring’s Automatic Activity Detection feature too, which I find reliable. In the Oura Ring app, you tap the Plus symbol, select Workout HR to start tracking, then manually end the workout when you’re finished.

The resulting graph shows your heart rate throughout your exercise, pinpointing the lowest and highest readings, and giving an average too. It also estimates total calories burned. If you use the feature outside and have location tracking active, it also shows a map plotting your course, plus a few graphs to better visualize your performance.

It’s very well presented in the app, which remains one of the best wearable device applications I’ve used. At the moment, you can only choose certain activities to monitor — walking, running, or cycling — and with a choice of indoor or outdoor plans. That’s right, there’s no exercise mode for things like HIIT or cross training, or even a catch-all Other option.

Oura, in typical fashion, states workouts are coming — but doesn’t say when. It seems like an odd oversight not to include a basic mode for folks who don’t always walk, run, or cycle. I’m one of those people, and require my tracker-of-choice to take all my activity into account.

Given Oura’s lack of speed when it comes to introducing the Workout HR mode in the first place, I’ve no idea how long it will take to see more modes added.

While neither are medical devices, in my experience the Apple Watch is very accurate and provides a good measurement against which other devices can be assessed.

Where the Oura Ring impresses is its graphs and data presentation in the app. The Intensity graph clearly shows where your peak heart rate occurred, and the chart showing your average rate also pinpoints the lowest and highest rate too. Apple’s Fitness app provides much of the same data, but it is not presented so logically, and the lack of glanceable granular information is a downside.

However, if you track a HIIT workout using one of the Oura Ring’s current walking, cycling, or running modes, results vary more and won’t necessarily be accurate. Doing this introduces further discrepancies between the Oura Ring and the Apple Watch too, and it makes me very keen for Oura to add additional activity tracking modes soon. The Apple Watch has dozens of workout modes for just about every activity you can think of, plus very accurate GPS for location tracking, and a more motivational system of pushing you to reach daily goals.

Some workout tracking is better than none, but as someone who doesn’t run or cycle, the Oura Ring’s modes aren’t that relevant to me.

Oura’s app takes activity tracking data from the Apple Watch into account, so it seems that continuing to track workouts with the Apple Watch is the way forward for me — and I suspect quite a few other people too.

Sleep tracking against the Apple Watch

The Apple Watch has a basic sleep tracking mode, while the Oura Ring provides a far greater level of insight into your sleep and how it, along with your activity levels, affect your health. However, the Apple Watch still uses all its sensors to track sleep, including watching blood oxygen levels.

Like the workout data presentation, the Apple Watch’s Health app isn’t as well presented as the Oura Ring’s data, where it’s very obvious how you slept, and simple to quickly see the data it collected. The Apple Watch tends to simplify the data into trends, looking for abnormalities over time provided it doesn’t need to highlight something that requires urgent attention.

The Health platform on iOS also pulls in data from the Oura Ring to back up what it measures with the Watch. Apple provides more information about breathing rates than the Oura Ring, putting an actual figure on the rate instead of just reporting any changes or disturbances overnight like the Oura Ring, but it’s questionable how much more helpful it is. I just want to know if it’s bad, and the Oura Ring tells me that quickly.

The Apple Watch agrees on the Oura Ring’s blood oxygen readings, although it presents more data as it also monitors levels throughout the day.

While numbers in general between the two are consistent — HRV tends to be about the same as an average, as does resting heart rate and time asleep — but there’s a considerable difference between the two when it comes to viewing this data. The Oura Ring isolates the individual stats, while iOS’s Health platform buries or obscures a lot of it, concentrating instead on an overview of your health on a daily, weekly, or monthly period. The Oura Ring is the best sleep tracker I’ve used, and charging the Apple Watch overnight instead of wearing it makes the best use of time and device ability.

Is now the time to wear the Oura Ring as your only health tracker?

No, not quite. SpO2 measurements and a basic workout mode should really have been introduced far earlier on the Oura Ring, and they only bring it in line with other wearables, rather than push it ahead. Plus, there are still some compromises to be made.

The restrictive workout mode options mean it won’t be suitable for everyone, and just choosing a tracking mode to monitor a different workout returns varying results.

Using the workout tracking and the SpO2 sensor overnight does decrease battery life, so expect the battery life to fall from around seven days to four or five between charges. It’s still good (and longer than the Apple Watch), but you will have to change your charging routine. Adding blood oxygen sensing only makes the Oura Ring better as a sleep tracker though.

The Oura app is excellent, and I find the split between Sleep, Activity, and Readiness informative and easy to understand. Furthermore, the way it presents the data is clearer and quicker to find than it is in Apple’s Health and Fitness apps. The scores given to each category do help me understand how my body is performing and whether I need to do more or sleep more (the answer is usually yes to both), while the Apple Watch’s “closing the rings” method is more motivational but less immediately informative.

All this means I’ll continue wearing the Apple Watch and the Oura Ring together. The Oura Ring’s updates have increased its ability, but it’s still perfectly complemented by the more generally capable Apple Watch. This isn’t a slam against either product, it’s just that one does certain things better than the other.

Wearing them together means you get more information, more functionality, and the best of both worlds when it comes to activity tracking, health monitoring, and data presentation.