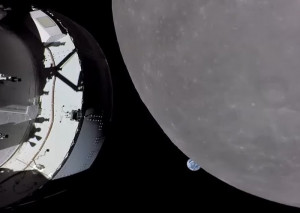 Five days after launching from Earth aboard NASA’s next-generation Space Launch System (SLS) rocket, the Orion spacecraft has performed a successful flyby of the moon, coming within just 81 miles of its surface. During its close encounter, it also snapped a striking image of Earth. NASA posted the incredible “Earthset” photo on Monday.

It shows Earth moving behind the moon, with part of the Orion spacecraft also visible.

Earthset. ?@NASA_Orion captured this shot of Earth “setting” while the spacecraft passed close to the Moon. Nearly 270,000 miles (430,000 km) away, #Artemis I will soon surpass Apollo 13’s record-setting distance from Earth in a spacecraft designed to carry astronauts. pic.twitter.com/lvDS7nGPRo &mdash; NASA (@NASA) November 21, 2022

The uncrewed Artemis I mission is testing new hardware ahead of crewed missions to the moon that will culminate in a permanent astronaut presence on the lunar surface and in lunar orbit, similar to how humans live and work on the International Space Station in low-Earth orbit today.

“Orion passed 81 miles above the moon, traveling at 5,102 mph,” NASA said in an update on its website on Monday, November 21. “At the time of the lunar flyby, Orion was more than 230,000 miles from Earth.” The space agency added: “The outbound powered flyby burn is the first of two maneuvers required to enter the distant retrograde orbit around the moon. The spacecraft will perform the distant retrograde orbit insertion burn Friday, November 25, using the European Service Module.”

It confirmed that the Orion spacecraft will stay in this orbit for about a week to test its various spacecraft systems. The Orion will reach its greatest distance from Earth on Monday, November 28, when it will be more than 268,500 miles from home — further than any human-rated spacecraft has ever traveled into space. NASA is clearly delighted with how the mission is going so far.

All being well, the spacecraft will return to Earth for a splashdown landing off the coast of California on December 11.

A successful mission will pave the way for Artemis II, which will take the same route, but with astronauts on board.

Artemis III, which could take place as early as 2025, will endeavor to put the first woman and first person of color on the lunar surface as NASA moves toward establishing a permanent presence on our nearest celestial neighbor.