Gungrave G.O.R.E review: a PS2 throwback, warts and all 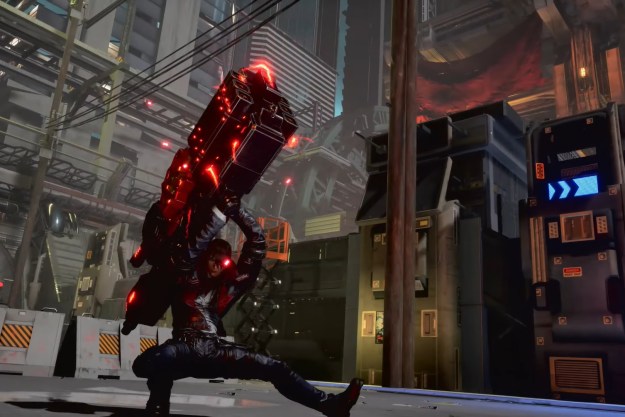 “Gungrave G.O.R.E delivers on the run-and-gun, stylish action with a modern PS2-like coat of paint that you’ll either love or hate.”

I imagined that Gungrave G.O.R.E was going to be my little vacation from the current gaming landscape. I expected it would take me away from those gigantic open-worlds filled with tons of sidequests and collectibles that are so trendy that we’re even seeing them with the Sonic series nowadays. The character action game quickly reassured me that it would take me far away from those AAA trends.

It warped me back to the age of Blockbuster rentals and finding a random PlayStation 2 game to take home and beat over a weekend — a true love letter back to a more simplistic time in gaming. But when you open a time capsule, sometimes you realize how much bad was mixed in with the good. Gungrave G.O.R.E is a true throwback rather than a modern game with a nostalgic coat of paint; it feels like a PlayStation 2 cult classic rebuilt for the new age.

While there’s some bold brilliance to be found in the stylish action game, there also are plenty of archaic design choices that come with the retro territory. It’s the right direction to take the reboot in, but just like a title from the early 2000s, it’s tailor-made for a specific audience and almost no one else.

The return of Gungrave

Gungrave G.O.R.E is the latest entry in the long-dormant Gungrave series, which appeared on PS2 in the early 2000s. Despite being available on modern consoles, it returns the series back to its roots in every way imaginable.

The simplistic run-and-gun action, the massive explosions, the ugly enemy animations, the edge factor — all of it created an over-the-top experience that brings me back to PS2-era games like Shadow the Hedgehog (maybe it’s that red-and-black color scheme that is so transporting). It feels like controlling the hero in a Chow Yun-Fat, John Woo, or John Wick movie. The Gungrave series as a whole bears similarities to classic action series like Devil May Cry, God Hand, and God of War.

The original entries were stylish action games that towered over a flood of hack-and-slash titles on the PS2, but they were much different than your average action game. That carries over into the latest installment, which has a bit more modern shine mixed in. Gungrave G.O.R.E feels more akin to Platinum Games’ Vanquish or even the Doom series combined with an old arcade shooter like Time Crisis. Controlling the silent protagonist, Grave, players shoot through endless rooms and hallways stacked to the brim with monsters, mobs, and experiments.

It’s no walk in the park, but it leaves room for players to survive with style. While its a totally new release, the controls work just the way they did on PS2. Everything is on point here, meaning players will never find themselves blaming deaths on missed inputs or bad lag.

Those tight controls work well with an expansive collection of moves that grow Grave’s arsenal, including tons of upgrades that can be bought with in-game currency. With an extensive list of abilities and countless enemies to fire at with infinite bullets and super abilities, I found it easy to get lost in the game’s high-octane rhythm. At its best, it feels like controlling the hero in a Chow Yun-Fat, John Woo, or John Wick movie.

It just makes you feel like an absolute badass.

The action isn’t without some mess, though. Gungrave doesn’t hold back with the number of enemies it launches at players, which overwhelmed me even on lower difficulties. While I welcome that the game isn’t as brainless as it led me to believe in its earliest levels, something doesn’t feel entirely fine-tuned here. As a small example, players can’t combo enemies in the air to gain an advantage.

Without tools like that, which can help create a level playing field in action games like this, I ended up having to spam my dodge roll to survive half of my encounters. That certainly didn’t make me feel like that action movie hero. It doesn’t help that the dodge roll doesn’t always feel as effective, as if it needed just a few more invincibility frames.

When enemies backed me into a corner while I had no super abilities stocked up, that basically meant an immediate death. After so many failures, I went back into stages, planned my routes better, and readied my defenses more carefully. It’s an enjoyable challenge if you’re up for it, but I wish I arrived at it more organically.

The game throws everything and the kitchen sink at players and expects them to react to it all with a limited camera and not many movement options.

Back to the basics

Let’s be real: When it comes to action games like Gungrave, not many players truly pay attention to the story. If you’re coming to this one expecting the emotional weight of Devil May Cry 5 or some multiverse-level shenanigans like Bayonetta 3, look elsewhere. Gungrave G.O.R.E continues its PS2 philosophy by keeping its narrative simple and sweet above all else.

In an interview with Digital Trends, the game’s general director, Kay Kim, described Gungrave G.O.R.E as a “fun game,” and the story reflects that. Grave and friends catch wind of Seed, a new drug on the market that destroys people’s souls — and the evil clan behind its distribution has history with Grave.

The goal is to stop them with as many bullets and explosions as it takes. Yeah, it’s not rocket science. But like in the old era of games it’s calling back to, it’s just a fun backdrop to place all the cool action in front of.

Gungrave G.O.R.E definitely won’t be winning any accolades for its narrative, but that’s not what it’s after. What you see is what you get with this one. You’ll either love that popcorn movie simplicity, or you’ll hate it.

That good old PS2 smell may not be that good

Gungrave G.O.R.E. is a totally new game in every sense of the word, but its visuals certainly don’t reflect that.

In fact, that’s one area where the throwback nature of it all is more of a detriment to what could have been. Gungrave G.O.R.E‘s animations are its weakest area. I love seeing the blood splatter after completely blowing up an enemy, but that’s the only place where I feel the impact of my hits.

Melee attacks feel exciting to execute, but they don’t really have any effect on enemies until they unceremoniously keel over after taking a chainsaw to the chest. The actual look of the game is lacking something as well. I love the cel-shaded visuals of the older titles in the series, and its presence is greatly missed here.

I can see what the team was going for, targeting a more gritty style, which definitely works with Grave’s character model. It just winds up feeling flat next to the anime look and feel of the PS2 classics. While visual fidelity leaves a lot to be desired, the game’s locations at least bring some charm.

There’s a good variation in level themes, and each looks great as a visually pleasing locale for all the destruction. Lush jungles, neon-lit cities, sludge-filled labs … I loved the look and feel of every location I fought in.

While there isn’t much exploration to be had, I was pleased to get a scenic look at it all as I fought off hordes of enemies.

Like a good B-movie, there’s some charm to Gungrave‘s sloppier parts. I feel like I’m playing a game that knows it’s a cult classic, and it chases that look and feel appropriately. That just makes it feel like a very niche project that’ll only resonate with PS2 nostalgists.

That’s just another piece of Gungrave G.O.R.E‘s appeal to me, though. Unlike the hard polish of other modern-retro throwback titles like Shovel Knight or Undertale, Gungrave feels authentically raw. It brings me back to a time when games felt like a grab bag of mystery.

There’s a lot of good in there, but you’ll need to dig through some dirt to get to it. Its an action game that truly brings out the nostalgia of that era like no other, warts and all. Plus, you can unlock new characters and replay the game with them.

How many games let you do that anymore these days?

Gungrave G.O.R.E was reviewed on PC.