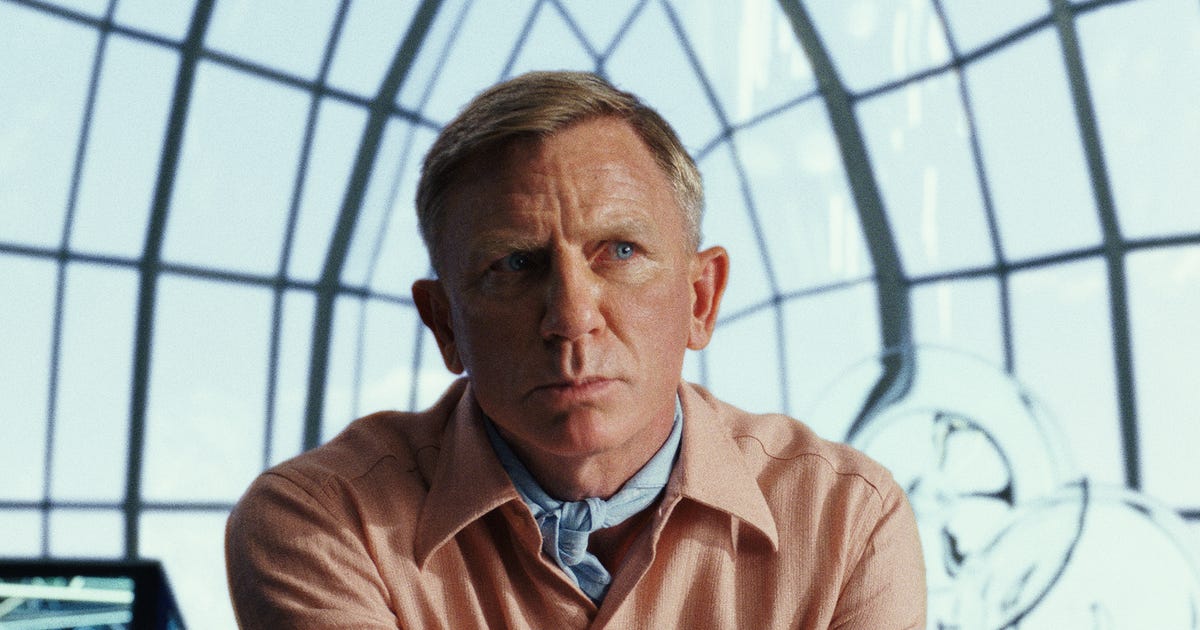 There’s no mystery to why Knives Out deserves a sequel. The sharp 2019 whodunit killed at the box office, providing a perfect motive for director Rian Johnson and star Daniel Craig to return for the sequel, Glass Onion: A Knives Out Mystery. But even with Netflix cash providing the opportunity, can they get away with murder again?

Fans of the first film will be primed for a mystery with a twist, which means the sequel has to work harder to surprise — running the risk of trying too hard, losing audiences in complexity, or straining credulity.

Happily, though, Johnson’s second stab is another twist-filled treat, having fun with the whodunit genre while also just being very funny. Glass Onion streams on Netflix Dec.

23, but in a first for the streaming service it will also play in major US theater chains. Be quick: It’s on the big screen for one week only at Thanksgiving, from Wednesday Nov.

Craig first played suave sleuth Blanc during the back stretch of his time as James Bond, while Knives Out was the palate-cleansing first film for writer/director Rian Johnson after his divisive Star Wars flick The Last Jedi. But now both are free and clear of franchise baggage, and both seem to be glorying in the chance to play. Craig plays up Blanc’s comedic eccentricities, reveling in post-Bond flamboyance (have you seen his fabulous new vodka ad, by the way?).

Johnson, meanwhile, delights in layering the elaborate plot. The invitation to the sun-dappled reunion comes in the form of a wooden puzzle box, and the whole film is built from puzzles within puzzles. This multilayered construction adds up to a hugely satisfying murder mystery.

Among the suspects, Norton is fiendishly bland, Hudson is on great form as a loud-mouthed fashionista, and Bautista excels again at revealing hidden depths playing a manosphere man-mountain. Monae gives Craig a run for his money as a character who — no, I’ve said too much. You’ll have to follow the clues yourself.

Layered into the whodunit is a blade-sharp satire skewering the rich folk who are often the subject of these kinds of mysteries. On the surface, you can bask in vicarious enjoyment of the golden sun and golden skin, the opulent setting and glamorous outfits — the first film’s muted colors and comfy sweaters seem positively dowdy next to the scale and excess of the sequel. But as in other recent films savaging the lifestyles of the rich and shameless, like Triangle of Sadness, Bodies Bodies Bodies or The Menu, part of the pleasure is knowing these fat cats are about to get their comeuppance.

At the same time, Glass Onion almost, nearly, just a tiny bit verges on being kinda pleased with itself. There’s an obligatory Alexa joke and some funny but uncomfortable-if-you-think-about-it COVID gags, and just an overall vibe that sails dangerously close to the territory of the later Ocean’s 11 movies, where big stars (and cameos) smirkingly swan about a high-priced vacation and expect you to thank them for it. But Glass Onion incisively invites you to laugh (albeit bitterly) at these grotesque entrepreneurs and influencers.

Where the first film took aim at the cloistered obliviousness of inherited wealth, the sequel turns its sights on the modern-day nouveau riche: desperate social media mavens, grasping politicians and deeply thoughtless tech types. They’re the sort of people who excuse their self-centered blundering as “disruption” and mistake their success as a product of their own mystical “genius” rather than self-serving callousness backed by generous helpings of other people’s money — and plenty of sheer dumb luck. It’s fun to see them fall apart when the knives come out, but more than that it’s a scathing critique of individuals doing things with no understanding of consequences and lumbering everyone else with the fallout.

Johnson is probably watching Elon Musk’s Twitter meltdown with great amusement (mixed, probably, with abject despair). The original Knives Out was an affectionate tribute to the classic murder mystery genre, with a twist. That’s a tough trick to pull off twice: When you’re watching a whodunit you know roughly how it’s going to be resolved, and now we’re primed to watch this film for the twist.

The first Knives Out could have been a quirky curio, but struck a nerve with audiences and earned Johnson a 2020 Oscar nomination for best original screenplay.

While gently sending up the classic whodunit, it inspired a minor revival in the genre. (Yes, Murder on the Orient Express did comparable box office two years earlier, but don’t tell me Kenneth Branagh’s Poirot would have been granted a franchise without Knives Out’s success.) Netflix was certainly impressed enough to throw reportedly huge amounts of cash at Johnson for more Knives Out sequels.

Which leads us to the only unsolved mystery coming out of Glass Onion: Can Rian Johnson and Benoit Blanc kill again?

Movies Coming in 2022 From Marvel, Netflix, DC and More