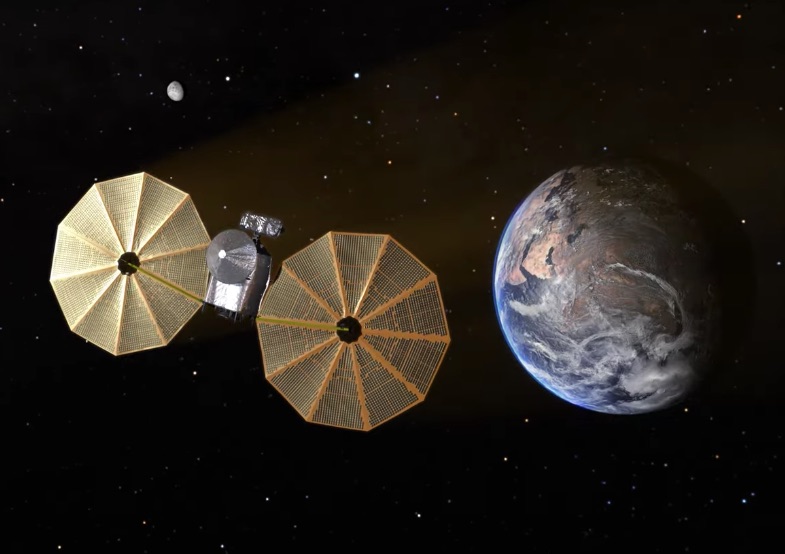 NASA’s Lucy spacecraft recently made a flyby of Earth, capturing some stunning images of our planet on its way to investigate the Trojan asteroids in the orbit of Jupiter. But Lucy has had some troubles in the form of a solar array that hasn’t fully deployed. Although issues with the array shouldn’t prevent the spacecraft from achieving its science goals, the team had hoped to fix the problem.

But now, they have had to pause their efforts to get the array into place. Lucy has two large round solar arrays which collect energy from the sun to power the spacecraft. These arrays were folded up for launch in October 2021, then deployed in a clock-like motion once the spacecraft was in space.

One of the two arrays deployed and locked into place as planned, but the second array didn’t fully deploy. The array folded out far enough to collect the power needed for the mission. However, because it wasn’t fully deployed, it couldn’t latch into place, meaning it was not as rigid as it could be.

Since the problem was discovered shortly after launch, engineers have been working to get the array fully deployed and latched. The concern was that, when Lucy performed maneuvers like firing its engines to adjust its course, the forces could shake the loose array and potentially cause damage.  “The likelihood of mission success in the current unlatched state is high, however the team expects that additional deployment–or potential latch–only improves confidence in performance without jeopardizing the spacecraft’s safety,” NASA wrote in an update. With the spacecraft now traveling away from Earth again following its recent flyby, the team attempted once more to deploy the array.

Though the array did deploy further, it still didn’t latch into place. The data also showed something concerning in the form of a small vibration between the array and the spacecraft’s attitude controller. “While this vibration is too small to pose a risk to the spacecraft in its current state, further array deployment attempts have been paused while the attitude controller is updated to resolve this issue,” NASA said. For now, the spacecraft has been turned so that the array is warmed by the heat of the sun, which should help it expand and provide more rigidity.

The team says they hope to try more deployment attempts once they have looked at the vibration issue.