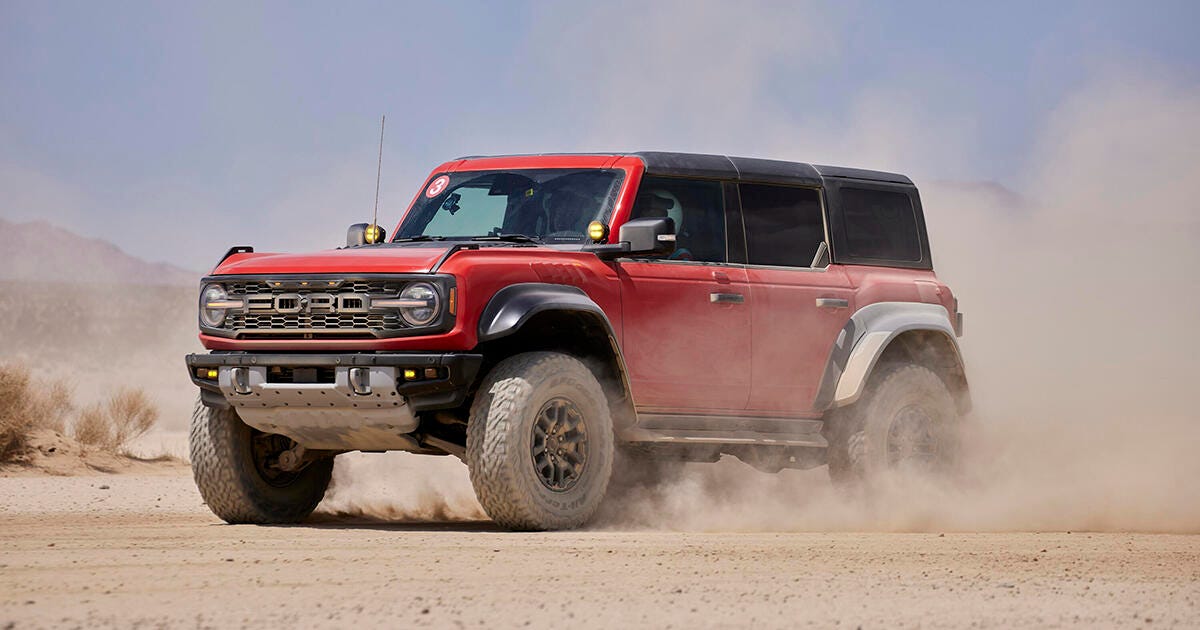 A hard-core off-roader like the Ford Bronco would be incomplete without a Raptor variant, and as you might expect, this one does not disappoint. The Raptor is bigger, faster, meaner and more capable than every other Bronco, and it makes for an exceedingly good time when the pavement turns to dirt.

The Raptor is only available with the Bronco's four-door body style, and it goes seriously wide. The Raptor is nearly 10 inches wider than other Broncos and the track grows by 8.6 inches, too.

The body itself isn't much different, though, so that width is all in the hips. Those are some seriously flared fenders, y'all. This wider stance not only provides more stability off road, it allows Ford to run massive 37-inch BF Goodrich KO2 tires as standard.

These tires are excellent over rocks, through the sand and in the dirt, though I'll note that if mud is in your future, BFG's KM3 tires are better suited for sloppy stuff. My test drive starts in Johnson Valley, California, my own backyard. I start off on a trail named Her Problem (seriously), which has been part of the King of the Hammers race for years.

And believe me, this trail is no joke: It's littered with large boulders and a few 3-foot-tall rock obstacles called waterfalls. I have the tires aired down to 25 psi and the Raptor in its Rock Crawl mode, and I engage the standard front and rear electronic differential lockers before heading out on the trail. Rock Crawl mode immediately puts the Bronco Raptor into low-range four-wheel drive, and it disconnects the front sway bar, turns off traction control and adjusts the throttle and transmission parameters.

Also helpful here is the One-Pedal Drive feature, where in order to apply the brakes, I just have to lift my foot off the throttle. This allows me to concentrate more on my visuals than my feet. The Bronco Raptor has a crawl ratio of 67.9:1.

That's less than what you can get in a Jeep Wrangler, but because the Bronco's 3.0-liter twin-turbo V6 makes 440 pound-feet of torque, I have plenty of grunt to get me up and over obstacles. And while some off-road purists will bemoan an independent front suspension while rock crawling, here, on this trail, it totally works. With the sway bar disconnected I have a little more front articulation, so the wheel can drop farther away from the body and still stay in contact with the rocks.

There aren't many obstacles the Raptor can't tackle.

And the Bronco has the necessary off-road geometry to get it done over these boulders.

Ground clearance sits at 13.1 inches; the approach, departure and breakover angles are 47.2, 40.5 and 30.8 degrees, respectively. Sure, you'll still scrape a bit here and there, but that's to be expected in the rocks, and nothing on this trail can actually stop me. There are spotters guiding me along the trail, but I find myself using the forward-facing camera.

I like that it projects the tire path and that it doesn't turn off above a certain speed. It's on as long as I need it. The only thing I don't like while using Rock Crawl mode is the rough shift from first to second gear.

When the revs are high in first gear and the engine is really working, and the shift is enough to jerk my head back and forth. It happens again, though not as bad, when the Bronco shifts from second to third. But it's worth noting I'm driving a pre-production rig, so transmission fine-tuning might be a little different when the Raptors hit dealers.

But where the Raptor truly shines is in high-speed desert running. This is what I live for and the Bronco 100% puts a smile on my face. In addition to 440 lb-ft of torque, the V6 makes 418 horsepower and the Fox live valve shocks can adjust damping rates up to 500 times a second.

I really like the Multimatic DSSV shocks that General Motors uses in its trucks, but the Fox ones have seriously long travel: 13 inches upfront, 14 inches around back. Switching the Raptor to Baja mode locks out the top 5 gears of the 10-speed transmission, so the Raptor always stays in its power band. All of this makes for a perfect high-speed machine.

On some parts of the desert drive loop, I'm hitting 70 mph, and I have the confidence to keep my foot planted when I see upcoming holes or whoops.

When I need to stop quickly, the antilock brakes are noninvasive and the pedal feels smooth with linear force. Still, I've never driven a stock SUV faster in the desert. The Bronco Raptor doesn't do badly on the pavement, either.

At 5,700 pounds this SUV is heavy, so don't expect to hustle up any canyon roads, but the Raptor holds its own fairly well while driving in Sport mode. While using two-wheel drive, the transmission shifts smoothly, doing its thing in the background without any weirdness. Ford's Co-Pilot 360 driver-assistance technology is standard and includes forward-collision warning, emergency braking, blind-spot monitoring (a must, since the Bronco Raptor's sightlines can hide smaller vehicles) and lane-keeping assist.

Unfortunately, adaptive cruise control costs extra. When it comes to towing and payload, I have good news and bad news. The good: The Raptor can tow more than a standard Bronco, rated at 4,500 pounds.

That's enough for an open trailer and a race car or UTV. The bummer? Payload is down.

As you might expect, fuel economy is not one of the Raptor's strong suits. This SUV has an Environmental Protection Agency rating of 15 mpg city, 16 mpg highway and 15 mpg combined. That's pretty analogous to an F-150 Raptor with 37-inch tires, but a Jeep Wrangler Rubicon with less power can get you up to 23 mpg combined.

Keep in mind, however, that no way in heck are you moving as quickly through desert in a Wrangler: Even the V8-powered Wrangler 392 would have a hard time. The 2022 Ford Bronco Raptor starts at £70,095 including £1,595 for destination, and it doesn't have much in the way of competitors. The Wrangler 392, which would likely match the Bronco Raptor in the rocks but be left in its dust for go-fast shenanigans, starts at a whopping £81,190 including £1,595 for delivery.

The Land Rover Defender V8 is another option, but it starts in six-figure territory. For now, the Bronco Raptor tops its own pedestal, and it's an SUV I would totally buy. It satisfies my need for desert speed while being more than capable at slower rock crawling.

As far as stock off-roaders go, it doesn't get better than this.